In part two of this series, let's take a look at how we can use wasted votes to visualize our elections to actually see how good or bad they are.

I wanted a way to show the relationship between the wasted and effective votes, but a pie chart that just showed the percentage of each was too simplistic. It didn’t tell the viewer anything about the nature of the votes. Were they wasted because of an extremely popular candidate getting more support than they needed, or because of wide support for multiple candidates where they each had a lot of support, but not enough to cross the threshold? It also didn’t say anything about the necessary/sufficient distinction that was at the heart of the definition.

To depict these relationships visually, I decided to use area-proportional Euler diagrams. They show the balance of both the wasted versus effective votes and also the balance of sufficient versus necessary votes. But before we look at the real-world examples, let's see what the worst case and best case scenarios look like. This will help us focus on the real diagrams and give us some reference points for comparison.

In the worst case scenario, all of the votes are wasted. Interestingly, there are actually two different ways this could happen: either all the votes are necessary or all the votes are sufficient. In the case of all necessary votes, this would happen when no one passed the threshold for election (no one wins). In the case of all sufficient votes, this would happen when everyone is elected no matter how many votes they receive (everyone wins). A vote in either case is equally meaningless. Your vote makes no difference when it is necessary, but not sufficient as well as when it is sufficient, but not necessary. 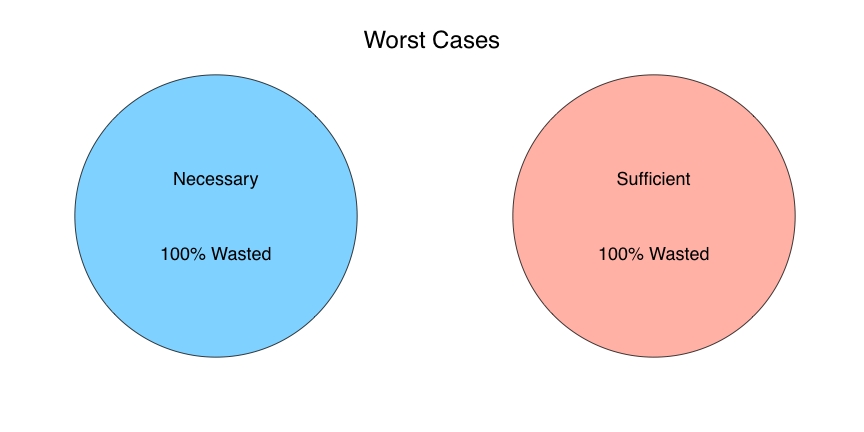 The Euler diagrams for the worst case scenarios for election effectiveness.

In the best case scenario, all of the votes are effective. Here, every vote is both necessary and sufficient. This ideal is very hard to achieve with standard single-winner elections, but nonetheless, it can be visualized: 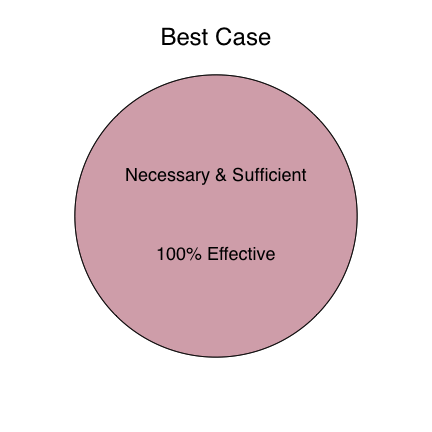 An Euler diagram of the best case scenario for election effectiveness.

It is hard to see, but in this case, both sets (necessary votes and sufficient votes) completely overlap so even though there are two circles, to the eye there appears to be only one.

Getting back to our real-world elections, here is the Euler diagram for Indiana's first US Congressional district in the 2020 general election as discussed in our previous article. 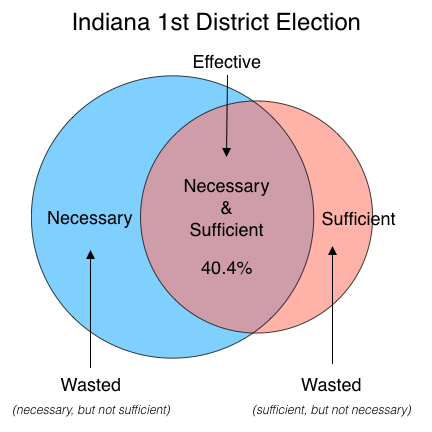 The Euler diagram showing the effectiveness of the 2020 election for Indiana's 1st US Congressional district.

Here, 40.4% of the votes were effective at obtaining the result. That means that 59.6% of the votes were wasted—not a very good deal if you are a voter. The situation is even worse if we look at primary elections. Below are the diagrams for the first district's 2020 primaries. 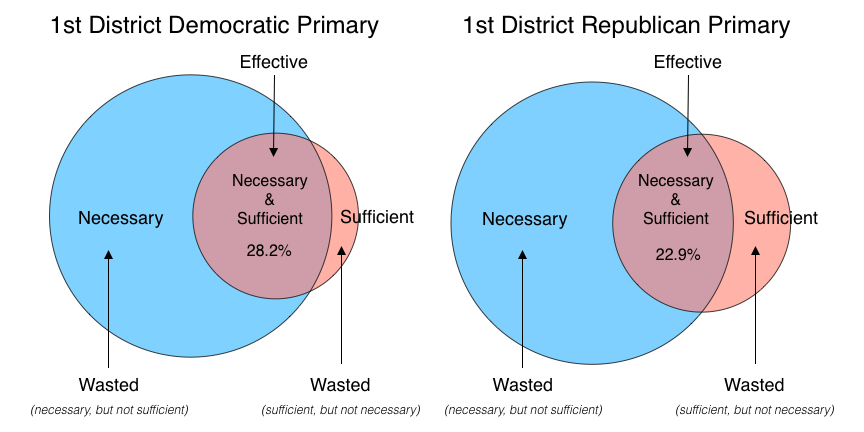 The Euler diagrams showing the effectiveness of the primary elections for Indiana's 1st US Congressional district.

Here the Democrats wasted 71.8% of all their votes. The Republicans did not do any better, wasting 77.1% of their votes. Unfortunately, this degree of waste is business-as-usual in Indiana. For example, the average percentage of wasted votes in Indiana's 2020 state House elections was 75.8%. For state Senate elections, the average was 77.3%.

These are just a few examples, and there are many others at all levels of government that are just as bad. Is this acceptable? If so, at what point is it not acceptable? The answer may shock you.

If a tree falls in a forest …

When I began analyzing elections, using the threshold as the dividing line between sufficient and necessary votes, I knew that it was determined in plurality elections by the second-place candidate's support. If the second place candidate received 35% of the vote, then the threshold for election was 35%. The winner needed to cross this threshold in order to win. But what is the threshold when there is no second-place candidate? What if no one voted for the only candidate on the ballot? Could they still be elected? This question is similar to the classic thought experiment: If a tree falls in a forest and no one is around to hear it, does it make a sound? If a candidate runs for office and no one votes for them, can they still be elected?

To answer this question, I contacted the Indiana Election Commission. The answer I received was shocking, but not entirely unexpected: No, there is no state law requiring a candidate to receive any votes (not even one) to be elected.1 For example, IC 3-12-5-3 provides that if a candidate for local office is unopposed, then the circuit court clerk shall, at the request of the candidate, issue a certificate of election in the same manner as if the candidate is elected to the office. Whether they received any votes or not was irrelevant.

So what does this mean? In the case of an unopposed candidate, it means that there is no threshold for election. This also implies that any votes cast in these races are inherently meaningless. This is because any vote cast is sufficient, but none of them are necessary—we need both to have meaning. In terms of effectiveness, it is the worst case. No matter how many people vote in these races, they all have the same number of necessary votes: 0. Below are just two examples from the 2020 Indiana Senate elections. 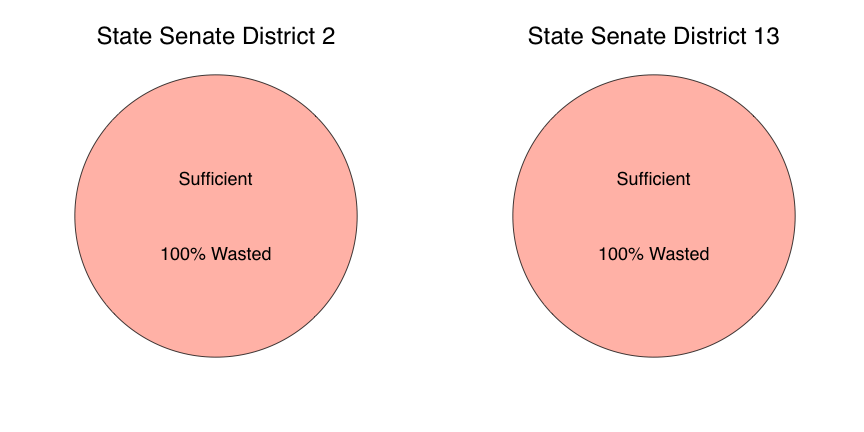 The Euler diagrams showing the effectiveness of the 2020 elections for Indiana's 2nd & 13th Senate districts.

This worst case scenario occurs quite often in Indiana. Over a third of the state Senate elections in 2020 were 0% effective. The state House elections were only slightly better with just under a third of all races being 0% effective. So to answer our own question: Yes, this (apparently) is acceptable. In fact it is so acceptable that there is no point at which it can become unacceptable. 100% of the votes can be wasted and we (or the powers-that-be) still consider this a successful election.

This situation raises another question: If an election with 100% of the votes being wasted is acceptable, and these types of elections comprise a third of all elections, is there any point at which that ratio is unacceptable? With gerrymandering, could we eventually fall down a slippery slope and arrive at a situation where all elections in Indiana consist of all and only wasted votes? If this does happen, some might claim that our government is still of the people, by the people, and for the people, but at that point, will anyone really believe it?

There is a better way

So how can we improve this situation? In our next article, we will take a look at some real ranked-choice voting elections from states that are already using it. Are they more effective than the elections we have in Indiana? Yes. How much more effective? Let's find out.