Every November in Indiana, people take part in their local and regional elections. Many will complain that their vote doesn’t make any difference. Many will decide not to vote because of this.

The following is the first in a series of articles looking at our current election system, its problems, and how we can fix it.

When I started analyzing my local elections, I just wanted to find out how good or bad they were. Were they competitive? Did it make any difference if I voted at all? With so many people dissatisfied with government and elections in general, I also wanted to find out what made a good election and what made a bad one. I started with just a spreadsheet and a basic understanding of what to look for: wasted votes.

At the time of this writing, the Wikipedia definition of a wasted vote is:

… any vote which is not for an elected candidate or, more broadly, a vote that does not help to elect a candidate. The narrower meaning includes only those votes which are for a losing candidate or party. The broader definition of wasted votes includes votes for winning candidates in excess of the minimum needed to win.

When I started to graph election results, I found that if I knew the threshold for election (the finish line that a candidate must cross in order to be considered elected), I could plainly see where the wasted votes were (assuming the broader definition). Once these were identified, I could also see what remained: the effective votes.

For example, consider the 2020 general election for Indiana's 1st US Congressional district: 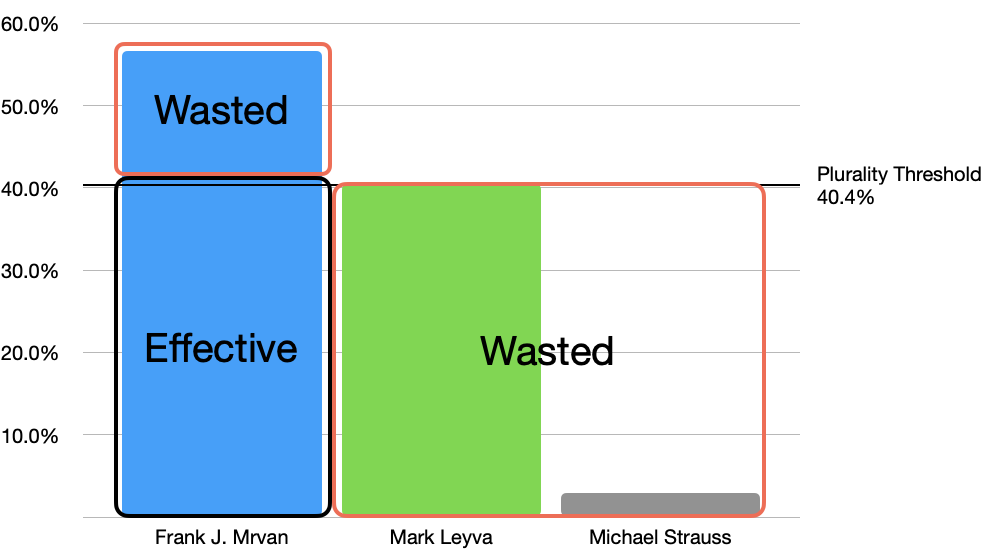 Wasted versus effective votes in a single-winner plurality election.

Here the winner has a majority (over 56%) of the votes, but the more interesting data point is that even more of the votes (almost 60%) are wasted. These wasted votes could be removed from the election and it would not change the outcome. When people complain about their vote not making any difference, this is exactly what they mean. Having more wasted votes than effective votes seemed like a good sniff test for a bad election.

Setting aside US presidential elections and the mess that is the electoral college, a majority vote is probably what most people think of (and assume) when they go to the polls. As the recommended method of decision making by Robert’s Rules of Order, it is also the most commonly used threshold for votes in the US Congress.

Although Indiana law does not require that a winning candidate receive a majority of the votes, let's see what it would look like if it did. In the following example, the votes counts are exactly the same as before, but the threshold for election is set at a fixed 50%. 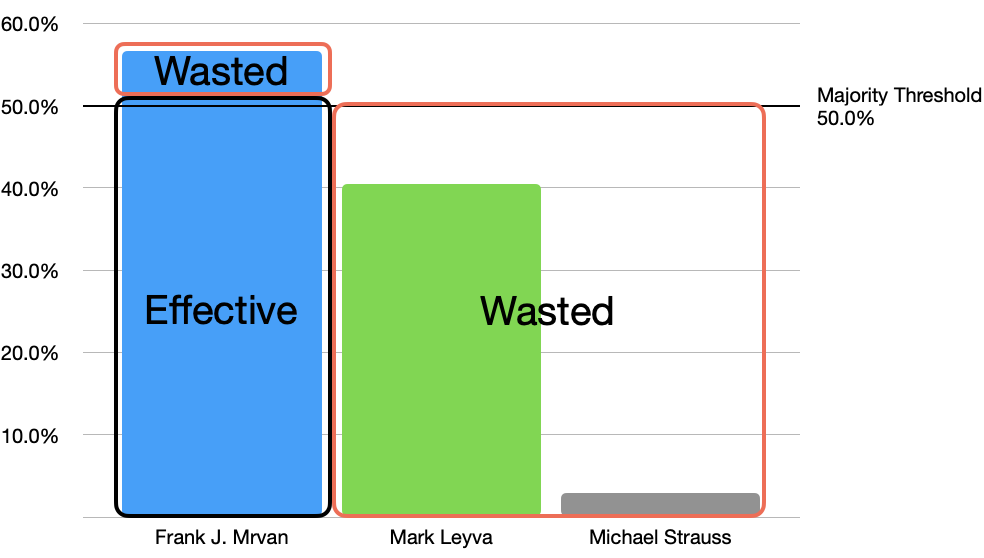 Wasted versus effective votes in a single-winner majority election.

Here, the candidates all have the same percentage of votes, but the ratio of wasted to effective votes has changed. The wasted votes now come to just under 50%, while the effective votes are just over 50% (a majority).1 That actually smells pretty good when compared to the ratio of a plurality election. Unfortunately, a majority threshold is only used in a small number of states, and even then, only in certain circumstances.2

I started thinking about the questions I was asking these votes. What was different about votes below the threshold from the ones above? What was different about votes for the winning candidate from the losing ones? While the definition of a wasted vote that I found in Wikipedia was reasonable and describes the concept accurately, it was not very succinct. I wanted a way to describe a wasted vote in more basic terms. I found those terms in Philosophy.

A short lesson in logic

When I studied logic, two concepts were at the heart of all deductive reasoning: necessity and sufficiency. A good example that my philosophy professor used was an implication involving money:

If I have four quarters, then I have a dollar.

This example was meant to show the difference between the two terms. If I really had four quarters, that was sufficient to say I had a dollar. As long as the first part (the antecedent) was true, the second part (the consequent) was guaranteed to also be true. On the other hand, if I didn’t even have a dollar, then I definitely couldn’t say that I had four quarters. Having a dollar was a necessary condition for having four quarters. If the second part was false, the first part was guaranteed to also be false.

In general, we are good at recognizing sufficient conditions but we often fail to see the necessary ones. Or worse, we conflate the two (especially when there is an advantage in not recognizing the difference).

Coming back to elections, I asked these questions:

The answers were hiding in plain sight: 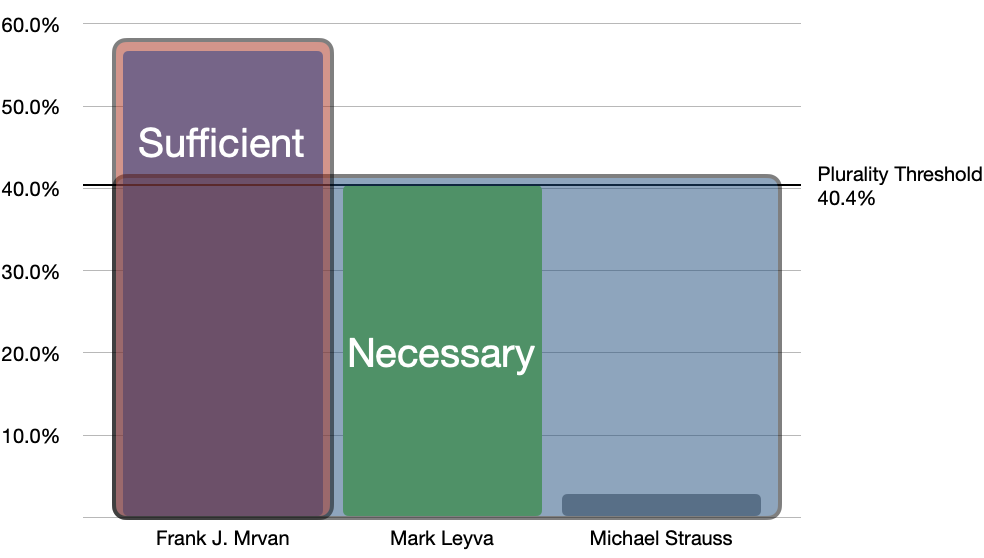 The sets of necessary and sufficient votes.

All the votes for the winning candidate were sufficient, but only some of them were necessary. Likewise, all the votes for the losing candidates were necessary, but none were sufficient. With two sets to work with (necessary votes and sufficient votes), I discovered that the intersection of these two sets was where the effective votes could be found. Every other vote that was not in this intersection was a wasted vote. Simply stated:

Eureka! This was the definition I was looking for.

So now that we know what a wasted vote is, how can we use this knowledge to measure how effective and meaningful (or conversely, how ineffective and meaningless) our current elections are? Can we also use this knowledge to measure the value of our votes? And how can ranked-choice voting improve this situation? Can it make our elections more meaningful and our votes more valuable?

Stay tuned … there is more to come.