In this article, we'll take a look a some real-world RCV elections and see how they compare to plain old plurality elections.

San Francisco, California adopted ranked-choice voting in March 2002, and it has been used in every local election since 2004. Voters use a single-winner form of RCV, instant-runoff voting (IRV), to elect most local offices, including:

In 2020, RCV was used to elect several members of the board of supervisors (equivalent to city councils in Indiana). Let's take a look a one of these elections.

Board of Supervisors District 7

In this district, seven candidates competed for one seat. The first-choice votes were as follows:

If this was a straight plurality election, as in Indiana, the tally of first-choice votes shown above would be the end result. The candidate with the highest number of votes (Joel Engardio) would be declared the winner, even though over 75% of voters preferred someone else. The effectiveness of such an election would be relatively low, at 21%.

How does IRV work?

In general, voters rank the candidates in order from their most preferred to least preferred. Then everyone's 1st choices are counted. If any candidate has a majority of votes in any round of vote tabulation, then they have won and the election is over. But if no one has a majority, then the candidate with the lowest number of 1st choice votes is eliminated and their votes go to the voters' next highest choice. This process continues until a candidate has a majority of votes or only two candidates remain. In that case, the one with the greater number of votes wins. 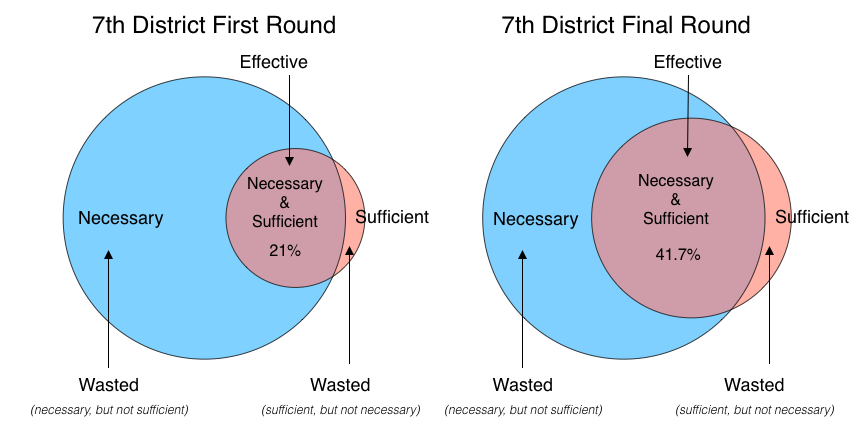 The Euler diagrams comparing the effectiveness of the 1st and 6th (final) round for San Francisco's 7th district election.

Cambridge, Massachusetts has been using RCV for city council and school committee elections since 1941. For these elections, a multi-winner form of RCV is used: the single transferable vote (STV). This form of RCV is also a method of proportional representation, which ensures minority representation with majority control. For example, any group of voters that number more than one-tenth of the votes cast can be sure of electing at least one member of a nine-member council, but at the same time, a majority group of voters can be sure of electing a majority of the council.

The most recent RCV elections in Cambridge were the municipal elections held in 2019. Let's take a look at the results of that year's city council election.

In this election, 22 candidates competed for nine seats. The first-choice votes were as follows:

How does STV work?

Just as in IRV, voters rank the candidates in order from their most preferred to least preferred. Once all the votes are in, a quota is calculated to determine the number of votes a candidate needs in order to win a seat.3 Any candidates who meet or exceed this quota are elected with any excess votes going to the voters' next highest choice. Then, just like in IRV, the candidate with the lowest number of votes is eliminated and those votes are transferred to the voters' next highest choice. Any candidates that now meet or exceed the quota from these transferred votes are elected and this process continues until all the seats are filled. In this way, STV maximizes vote effectiveness and minimizes waste.

Once you see how effective it is (see the diagram below), it's hard to ignore. The use of STV comes closest to the best case of 100% effectiveness than anything else we've seen! 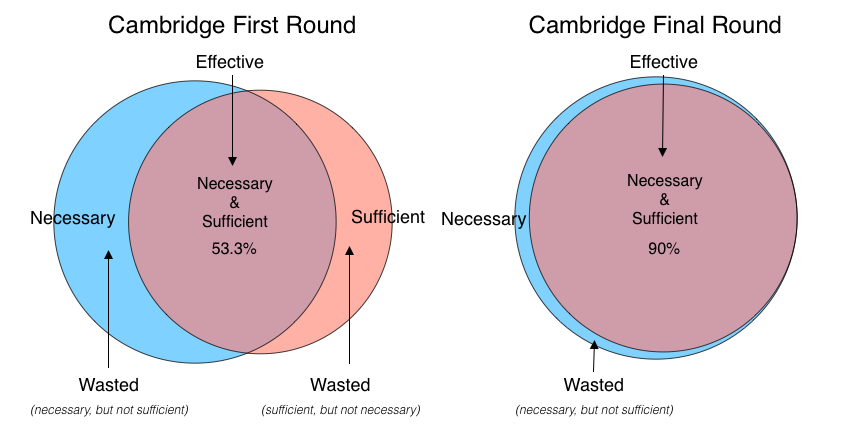 The Euler diagrams comparing the effectiveness of the 1st and 15th (final) round for Cambridge's city council election.

If increased effectiveness isn't enough of a benefit to support ranked-choice voting, our next article will cover some of the other benefits that come along for the ride. Stay tuned!